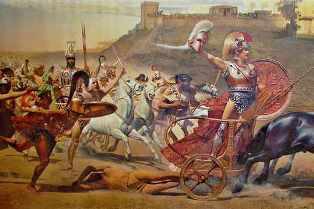 The tale of the Greeks before the walls of the city of Troy is related by the Greek poet Homer in his Iliad (760-10 B.C.). Paris, Prince of Troy, had abducted Helen, Menelaus wife, and had taken her to Troy, and Menelaus` brother, Agamemnon, king of Sparta, sent the Greek fleet to bring Helen back. Achilles was the hero that wouldn`t leave his tent during the siege of Troy and was deemed a coward until he finally emerged to kill the Trojan hero, Hector, before the city walls and drag his corpse around the city in his chariot as a mark of his prowess and triumph as a champion. The city was taken after the Greeks left a huge hollow wooden horse outside the walls of the city and pretended to embark in their ships for home. The Greeks inside the horse emerged to capture the city from the Trojans and repatriate Helen. 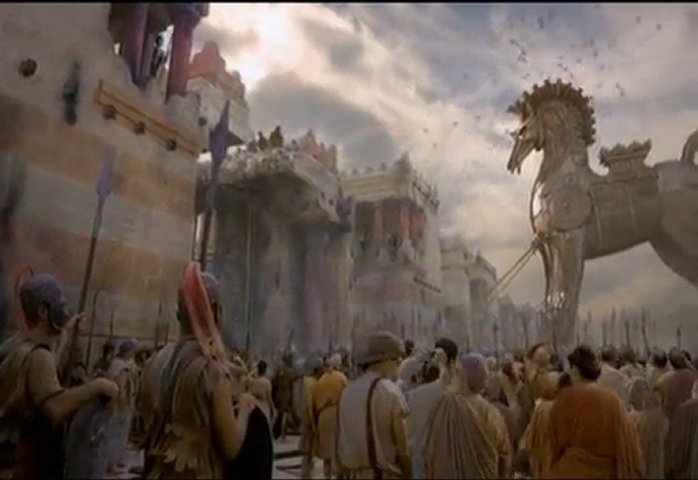 Although Achilles is viewed as a pagan by Christianity, he is in fact a type of Christ, that is, a Messiah, because of his purported invulnerability except for his heel by which he was bathed in the river Styx by his mother, the Nereid water spirit, Thetis, who held him by his heel while seeking to bathe him in immortality. The scene is identical to the Christian baptism, which is designed to protect humans from Satan, who was the angel turned into a serpent by God, and left to dwell in the paradise of Eden, before God created Adam, the first man, and Eve, the first woman, who the serpent tempted with the `fruit of the tree of good and evil`, saying `You shall be as gods.` (Gen: 3. 5) Eve and Adam were expelled from Eden by God although she was promised, `You shall crush the head of the serpent with your foot, although he shall bruise your heel.` (Gen: 3. 15) Achilles is the heel of Eve`s `foot` because Greek society was based on homosexuality in pederasty and the enslaving of women`s host wombs for war, and Achilles` saving of Helen at Troy was the exception that broke the rule. Because women have their own penis as futanarian women, they`re Eve`s `foot` race born after Eden which has almost disappeared from socio-history because of men of the `serpent`s seed` enslaving of her host womb for homosexuality in pederasty and war. 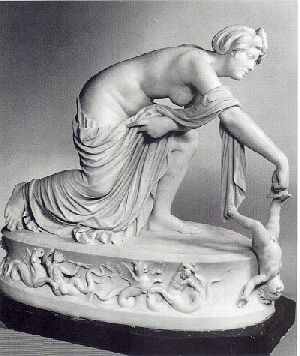 By the late 20th century the `biological warfare` of the `serpent`s seed` of men had spread through homosexuality in pederasty`s mixing of blood, shit and semen in each others` anuses until the incurable killer disease of HIV/AIDS ensured women`s faithfulness in fear to the ring slavery of monogamy in Western civilization, culture and art, which women were still able to produce from their host wombs despite men`s depredations against `woman`s seed` of humanity. By the early 21st century the geek successors to the Greeks had devised viral machine code in emulation of homosexuality in pederasty`s HIV/AIDS, which the geeks called `Trojan horse` viruses, to infect computer brains and prevent them from functioning as male braining without `woman`s seed` effectively kept women`s and humans` brains from functioning by a form of decapitation equal to the geeks` preventing women from using computers to remember their own species` penis and store that memory to educate their daughters. 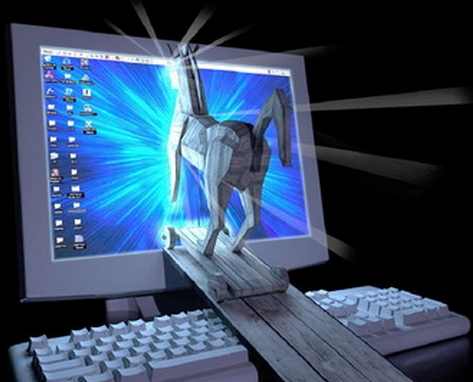 Sexually reproducing their own brains` powers between themselves, women would be socio-economically independent of men and able to devise labor saving technologies to free them so that they could escape from men`s host womb slavery for war in death, which was the power the serpent offered Eve and Adam in Eden. Women`s medical science would give them rejuvenation and continuity of memory over immortal life spans and so the death in ephemeral brainlessness planned for them by the enslaver would be replaced by a human futanarian race of women able to educate their daughters for life rather than death in war. Islam`s four wife marriages provide the social framework for sexual reproduction between women at a ratio of 80% women to 20% men that, translated into democracy, would enfranchise women with a proportionate voting majority in any and all democracies. 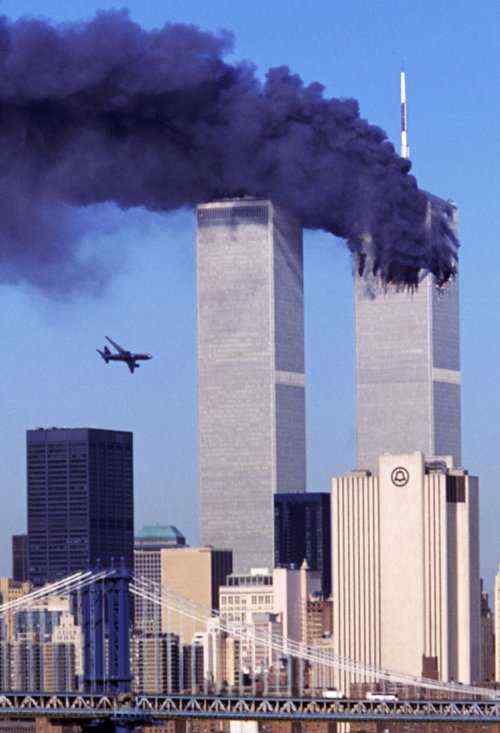 When the United States of America was attacked by Al Qaeda terrorists operating out of Afghanistan who hijacked civil airliners and crashed them into the Twin Towers of the World Trade Centre on September 11, 2001, it was an Achilles` heel for Western civilization, culture and art, because the US` response was to topple the misogynist Taliban regime in Kabul, Afghanistan, before invading Saddam Hussein`s Iraq, where the dictator had offered bases to Al Qaeda after 9/11. The terrorists` aim was to provoke the US into `world trade` where `trade` is a euphemism for that `brutality and violence`1 associated with homosexuality in pederasty, that is, war, whereas Moslem women in Islam represent Jesus` `seed` of fulfilment through futanarian humanity`s women. Though Judaism seems supportive to Christians, Jews can`t be born unless born from women, which means that the `chosen people` of the Bible are women, and the development of Islam from the relationship between Sara, Abraham`s wife, who bore Isaac, founder of Judaism, and Hajer, her maid, who she gave to Abraham, and who bore Ishmael, founder of Islam, is the path of Christianity away from sexual reproduction between men and women and towards `acceptance`, which is what `Islam` means, of sexual reproduction between women in polygamy.

The Christian Serbs who set up rape camps in which to male brain a generation of Moslems during the Bosnian war (1992-95) in Eastern Europe represented the Achilles` heel of Christianity, which is ignorance of God`s `foot`, that is, Eve`s `seed` of futanarian `woman`s seed`. Lauded as the harbingers of freedom symbolized by the statue of `Liberty` in New York harbor, the US` media blackout on `woman`s seed` prevents her democratic potential and socio-economic independence as a species from being realized through the US` hypnagogic warmongering through its `action` movie and TV Empire in Hollywood, Babylon, which forbade women`s penis from being seen on `moral` grounds as long ago as President Will Hays of the Motion Picture Producers and Distributors of America (MPPDA) `Hays code` (1930-67) prevented women from `raising their foot` in bedroom scenes so as to obviate love for the promotion of war. Achilles was a Christian, because he was God`s `foot` rescuing Helen, and didn`t mind the bruising to his heel as he crushed the serpent`s head with it. Hollywood, Babylon, is the `crusher` of God`s `foot` because they don`t want `woman`s seed`, which is why Saddam Hussein`s name means `crusher` and `small handsome man`, because his role was as homosexuality in pederasty`s actor celebrating the male brain`s devourment of `woman`s seed` for the Antichristian West had already had theirs.