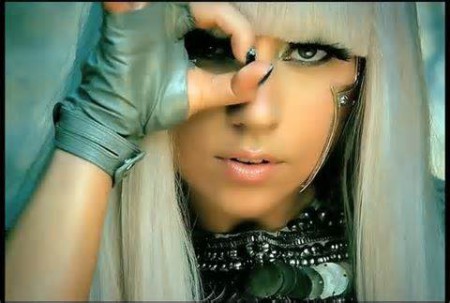 In the video single for Bad Romance Lady Gaga and her dancers emerge from plastic coffins with red crucifixes affixed to them. Wearing white crowns and white jump suits they`re representative of the Resurrection of victims of the HIV/AIDS virus, which in Revelation is described as `blood plague`.

HIV/AIDS is a `valence` of the `red dragon` of Revelation, which is described as waiting to devour the `New Redeemer` born to the `woman clothed with the sun and with the moon at her feet`, who remains `hidden` upon the Earth and protected by the New Redeemer until she`s ready to leave for the stars in heaven and `sow` her `seed`.

Because she has `seed` of her own she has her own penis, that is, she`s `futanarian`, and after her victory in heaven against the serpent`s `seed` from Eden that has grown into the `red dragon` of Revelation, she`s given a new heaven and Earth by God while the evil serpent`s `seed` receive perdition, which is a metaphor for the consequences of spreading the `blood plague` of HIV/AIDS.

In ancient Greece homosexual pederasty was the means by which women`s wombs were enslaved by men for the purpose of spreading their `disease` further. Against Troy they employed the prototypical homosexual method of pretending to be `friends`, and the `gift` they left was the huge hollow wooden `Greek horse` from which they virally emerged to take the city once the Trojans had `accepted the virus`.

In Lady Gaga`s video Bad Romance she `challenges` the virus represented by men who are the symbols of the enslavement of women`s wombs as a `host` for their emergence as the `boy sons` of homosexual pederasty, that is, the `poisons` of war, plague and death. Lady Gaga`s `challenge` is messianic in that she`s performing against the virus and indicating what young women must do.

In Revelation `Babylon the Great, Mystery, Mother of harlots, and of the Abominations of the Earth` is depicted as ` having a golden cup in her hand full of ... her fornication`, and the central male figure of Lady Gaga`s Bad Romance video has a golden `Greek` warrior`s `chin guard` and is drinking from a cup, which suggests he`s one of the `heads` of the seven headed beast with ten horns that carries her. She`s `Mystery` because she can live with the virus, that is, men, despite their making of her `Greek whores` that produce `boy sons` that spread the `blood plague` of the `poisons` of HIV/AIDS, war and death.

In `valence` terms, the one with the golden Greek warrior`s `chin guard` is the representative of the `red dragon` of homosexual pederasty and `blood plague`, who is drinking while Lady Gaga sings and performs, that is, she does all the work and, effectively, he sits on the toilet and drinks `abominations and filthiness`. Because semen mixed with urine, blood, and shit is productive of HIV/AIDS, and the toilet is for shit and urine, the indolent male character of Bad Romance sits while Lady Gaga `works`, that is, urine and shit is his `work`.

Lady Gaga`s `Trojan` is working to defend the citadel of the women and they`re her T-cells in the video, whereas the symbol of the devouring `red dragon` of homosexual pederasty and `blood plague` is the `Greek` virus that seeks her death. At the close of the video Lady Gaga and her dancers are clad in red chiffon from which the colour has faded. In symbolic terms, the red cells are dying of AIDS after `contracting` HIV, which means Lady Gaga`s white crowned dancers at the video`s beginning, and who emerge from white plastic coffins as fighters, can`t win. Because, for men, women are a `valence` of themselves as her `virus`, which is a `killer` of `working` bodies such as Lady Gaga`s. Presumably, the virus` ambition in Bad Romance is to drink while sitting on the toilet, and so to criticize Lady Gaga`s `body of work` for having valences other than that of performing her toilette.

Hindu mythology has a few indicators that are suggestive of solutions to the male problem of homosexual pederasty and its single valence of war and plague. The mother goddess Kali is depicted as having eight limbs and six arms which she uses in a warlike way. Shiva, who is her consort and the `destroyer` of her, is depicted as two-armed, four-armed, and six-armed, because he represents men as a virus developing the valences it needs in order to `woo` and kill her.

Kali`s nature is similar to the T-cells of the body that has receptors that recognize and neutralize poisons. It is the HIV/AIDS` virus` blocking of the T-cell receptors (TCRs) that enables its killing of the body. Its valences are T-cell receptor blockers, whereas the T-cells` valences are designed to neutralize poisons. The valence of the `boy sons` of the `red dragon` of homosexual pederasty`s `blood plague` is HIV/AIDS, whereas the T-cells` TCRs make of it a Kali mother goddess rather than a `destroyer` Shiva, which has valences only for killing her.

The solution to HIV/AIDS is radical insofar as the Bible tells us the `hidden` woman with her own penis leaves Earth to `sow` her `seed` in heaven while the evil `seed` receives perdition. In Britney Spears If You Seek Amy, which is usually read as `F*U*C*K me`, Britney`s at the centre of a circle of young women, who don`t correspond to the usual psychology of what Carl Gustav Jung (1875-1961) terms her animus or soul which, appearing in dreams, imagination and art, perceives itself as surrounded by men:

`All of the boys and all of the girls are begging to if you seek Amy.`

She`s Troy to the `Greek` valence, and the young women surround her in celebration of their `futanarian`. As a symbol of the function of their developmental capacity to transform sexual libido into spiritual or intellectual progress and growth, Britney`s their protective mother goddess Kali who, recognizing in her `body of work` that she isn`t a `destroyer`, and that women want to `F*U*C*K me`, can neutralize men`s `virality` and foster the growing penis of women.